The Evolving Nature of Crises: Where Are They Now?

Last year we took a look at evolving crises and compiled a top ten review of crisis influencers for 2014. As a precursor to our review of the cases making an impact in 2016, we thought we would issue an update on the 2014-15 case studies.

1. Infectious Disease: Ebola in West Africa, the largest recorded outbreak of the virus, taking the world and its response organisations by surprise.

March 2016: 2 years after the initial outbreak, with reported re-emergences in 2015/16, the Ebola outbreak cannot yet be declared “over”.  The WHO’s last press release on Ebola on January 14th stated that “All known chains 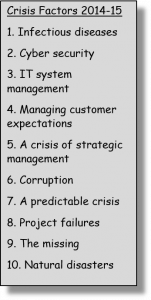 of transmission have been stopped in West Africa…but more flare ups are expected” as enhanced surveillance periods remain in place. “We are now at a critical period in the Ebola epidemic as we move from managing cases and patients to managing the residual risk of new infections,” says Dr Bruce Aylward, WHO’s Special Representative for the Ebola Response. “Vigilance is necessary to prevent new outbreaks.”

Concerns continue to emerge over the long-term impact and reports seem to suggest that far from being over the Ebola virus can remain dormant in survivors. The lessons from how this outbreak took hold and how control was established are considerable; from coordination and surveillance to community engagement and prevention. The jury remains out as to the success of applying these lessons to the Zika virus. 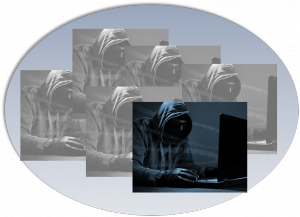 March 2016: Sony remains a cyber security cause celebre but is has been joined by many others whose failure to protect their systems and their data means that cyber crime remains high on the crisis agenda. For Sony executives it must have been a tough year. The company parted with Amy Pascal the co-chair and settled lawsuits with current and former employees who claimed to have lost personal data; that settlement was reported at $8 million.

There continue to be reports that it remains a hackers target with online comments and claims referring to a number of PlayStation Network outages in 2015 / 2016. Meanwhile, the number of dissatisfied gamers grows.

3. IT System Management: RBS. £56m FCA fines for the banking group for failure in the resilience of critical customer services.

March 2016: RBS appears to be feeling good about itself as bonuses for its top management team of £17 million are announced in January 2016 despite reporting its eighth consecutive year of losses. IT issues however continue to crop up; in June 2015 the Bank failed to make payments to some 600,000 customers, and on New Year’s Day 2016 the year started with debit cards not being accepted. Not surprisingly, social media commentary reflected the stress and frustration of the customer groups concerned.

March 2016: Online sales on Black Friday 2015 hit £1.1bn, up 36% on 2014, according to data company Experian and trade group IMRG, making it the biggest day of online shopping ever and the first time the £1bn mark has been breached. Evidence seems to suggest a significant move towards online shopping for Black Fridays with much lower footfall in the shops, some 9.6% down year on year over the equivalent weekend. Signs of retailers planning and adapting to meet changing customer expectations and behaviour.

5. A Crisis of Strategic management: Tesco. Profit warnings, fierce competition, accounting black holes, culture under scrutiny and a long road to recovery ahead.

March 2016: The food retailers continue to slug it out for market share but how has Tesco fared in the aftermath of the accounting crisis? Well in April 2015 Tesco posts a £6.4 billion loss, considerably bigger than analysts had expected and faces a class action over the £250 million accounting scandal. On the positive side it appears to have halted the slide in sales, reporting an increase in like for like sales for the Christmas period 2015.

It is pushing the post crisis recovery buttons by seeking to significantly reduce overheads, improve its image and realign its business back to its core values whilst continuing to have to deal with the well reported fallout from their supplier and accounting issues. 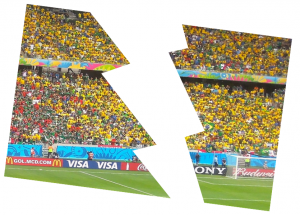 6. Corruption: FIFA. Reputation in crisis amidst bribery investigations and a leadership in denial with mounting pressure on sponsors to act and the old guard to be removed.

March 2016: All change as the crisis deepened. Despite Mr Blatter’s attempts to remain in control, the final push came in the form of a joint Swiss-American criminal investigation. In December 2015 Mr Blatter and Mr Platini were banned from football for 8 years. But this still leaves FIFA in the grip of a crisis, with investigations and rumours continuing and a move to sue its own ex officials marking the arrival of a new FIFA President in February 2016.

March 2016: Different location, similar issues but with a lot less impact on Government as this winter’s floods moved north. Met office reports on December’s Storm Desmond (the UK started naming storms from November 2015) plus other bouts of severe rainfall indicate that an estimated 16,000 homes were flooded in December in England alone even before counting the significant floods for Scotland from Storm Frank over the same period.

For reference, flooding of the Somerset levels which drove the Government crisis of 2014/15 flooded 150 properties according to local council figures. Which just goes to prove that crises are obviously not directly proportional to damage. At the time of writing, the March 2016 Budget provided £700m of extra funding relating to flood defence. 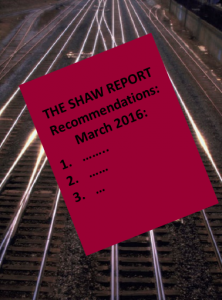 March 2016: The regulator’s investigation report issued in February 2015 highlighted weaknesses in areas of a) contingency planning and b) information flow during the disruption; Network rail agreed to implementation of the recommendations made. The organisation continues to suffer in the media, with regular comments referring to crises and failures to deliver. But there was no repeat of the 2014 Christmas chaos over the late running of planned engineering works. However mention London Bridge to anyone trying to use that station and the reaction will hint at continuing crisis.

The political status of this organisation continues to be, and may always be, the subject of speculation. Rumours of a breakup of Network Rail were ruled out (Shaw report 16 March 2016) but “devolution” and change is coming.  The future demands on the rail network, be it Leeds to Manchester or the projected growth of London, the restrictions on investment etc. will continue to drive issues the organisation will struggle to handle.

9. The Missing: Malaysian airlines. The tragic loss over a 5 month period of 2 passenger planes puts the people aspects of crises into sharp focus raising important issues for family communications and care for relatives.

March 2016: The search continues, with occasional reports of wreckage being found, most of which is then disproved. Only the discovery of the barnacle-encrusted flaperon on Reunion Island, more than 3,700km (2,300 miles) away from the main search site, in July 2015 has been shown to come from the plane. Only this month (7 March) the Head of the Australian search stated that he believes the plane will be found this year.

For 2015 the airline industry continued to suffer tragedy with Germanwings Flight 9525 being flown into a mountain by its co-pilot as a “deliberate and planned action” (per the findings of the final BEA report issued in March 2016), killing all 150 people on board.

All of these tragedies demonstrated that the personal aspects of communication and care for families and staff needs to be number 1 on the crisis agenda.

10. Natural disasters: The Insurance round-up from Munich Re indicated a relatively quiet year (2014) for natural disasters with an absence of “very severe catastrophes” and a “quiet” North American hurricane season. Total loss of life was recorded as 7,700 people in 2014.

March 2016: The Nepal earthquake in April of 2015 is reported to have claimed 8,850 lives and the figures from Munich Re for 2015 record some 23,000 deaths for the year which returns the figures back to the 2013 level. But it is worth bearing in mind that the insurers’ figures record a 10 year average of 68,000 deaths per year. The message remains the same: don’t overlook the need to plan and exercise.

Over to you: share with us via Twitter @corpress the events that have grabbed your attention in 2015.

Interested in the “Crisis Landscape – Looking Forward”? Join us soon for a Webinar that will examine the nature of emerging threats through current case studies. Follow us at www.corpress.uk or via Twitter @Corpress for updates.